Okay so I decided to take a rest day today and catch up on some stuff I’ve been neglecting, and one of those things is a new healthy cooking project I have for some real proper protein-heavy Oatmeal Raisin cookies. They are admittedly my first baking project and not all that tasty, but I was real happy and felt successful with this project.

So quick snapshot of the recipe and prep…

I do not like walnuts (most really nice oatmeal raisin cookies I see sold have walnuts, so I’ve been fiending for one of these heartier cookies but always stymied by the presence of unwanted walnuts) but if you do like them you could slap some of those in as a great source of added protein and fiber.

Okay, so preparation is simple just combined all the ingredients (first protein powder, apple sauce, egg whites, cinnamon, flax seed… after mixing added vanilla extract, baking soda/powder, canola oil & splenda and gave a mix wanted these potentent ingredients mixed in thoroughly… finally did oats and raisins last and one last mix). Preheated oven to 350, made a mistake here in preparation to not have parchment paper which I feel is very necessary instead I sprayed a baking pan down with canola oil spray which still left me in a bit of a sticky situation after things were done. Cooked for approximately 12-13 minutes.

Okay, so this when formed into 8 cookies gives you snacks with the following nutritional values…

Now I admit, they weren’t as tasty as other better baked cookies but they had the spot on nutritional facts I wanted and I honestly am hesitant to tweak the recipe much until I research it’s impact on the nutritional facts. I was really happy though with the results, check the photo below! These are very filling which I was very surprised by, I never met a cookie I truly felt “full” eating but these definitely were that. 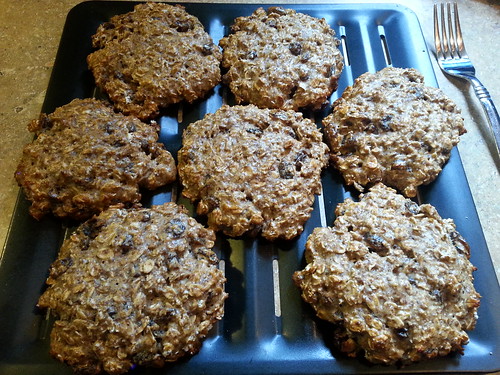 They definitely looked pretty proper too!

All in all, not bad for a beginner I say. Great way to use a rest day.