Okay in an attempt to be more proactive in the kitchen with bodybuilding meals, I’ve been scoping out various kinds of recipes. I’m a slow mover on these things because I like to plan, but I put this plan into action and snapped on it and learned a lot. So today for the first time I tried out a recipe for oatmeal protein pancakes!

As you know if you read some of my fitness logs I follow Scott Herman’s channels routinely. One of those videos, with help from his girlfriend Erica, they demonstrate how to make high protein pancakes. So this is the recipe I was experimenting with today.

I love pancakes, but stopped eating them after my dietary changes, this could get me back on the pancake boat.

Now they have the recipe there and you can customize it how you want, I’m not here just to repost the recipe I’m here more to discuss how the process went for me and what I learned. First, let me introduce you to the fam. These guys are all gonna become delicious pancakes for me. Well, in theory. So I followed the posted instructions (watch the video above) and made a few rookie pancake making mistakes. For one, I included too many oats (I poured a third of a cup instead of a quarter of a cup and said “screw it what can a little more hurt”). For two, and I realize this after watching a different protein pancake video, I should have precooked the oats (put the oats in first with a little bit of water to cover them, nuke for 60-90 secs) to soften the mix and make it a little more fluid. I also dropped an egg in the fridge like an idiot.

Anyways, when this mix got to the griddle the griddle was very hot and my mix was a little lumpy, so it didn’t really pour even. Then when I went to apply the blueberries (via the patented “throw them into the pancake as it cooks on it’s first side” technique) I took too long, and overcooked the pancakes a little bit. The uneven, lumpy texture made one of the pancakes mostly fall apart.

So what you see as a final result was not as professional or tasty as I had hoped (they were dry and falling apart). But fundamentally I know how to fix all these problems… the correct serving of oats, precooking the oats, more attention to cooking time and just not making blatant pancake-making errors. Voilà! Uh, well, not as picturesque as I’d had hoped.

So did I enjoy the creation? It was fun. I have a feeling when I master the art of pancake making, it will be better looking and tasting and I will update to reflect that. But you simply can’t argue with the nutritional facts of the end result as I prepared it…

Nutritional Facts (with my mix of brands pictured, same quantities as original recipe posted above):

Stats includes a dabble of sugar free maple syrup. Feel free to dress it with other fruits, or a low sugar chocolate syrup, hyphy mud or anything else that gets you amped up in the morning. This is a great recipe to play with.

After some attempts and failures, I did manage to master the practice of making these better with this recipe. I soak the oats in a little water and microwave them for 90 seconds to get them soft, use a little more egg white (1/4 cup). The blueberry integration was difficult because honestly my blueberries were too big to be using for pancakes (the pancakes became all crumbly). Also since I was a little dodgy on how long to cook I did them at a little lower heat (yes your pancakes are better on a higher heat, but if you’re a newb doing something a little under 350 gives you more time to observe the changes). So instead of blueberries to flavor them, I used gobs of cinnamon, which really helps you metabolize the few carbs you’re intaking with this breakfast (although it’s not that many, really). Was very happy with the results! Using a non blocky material in the pancake batter really made it easier to pour too, given that I am again a newb at this. Proof of success! 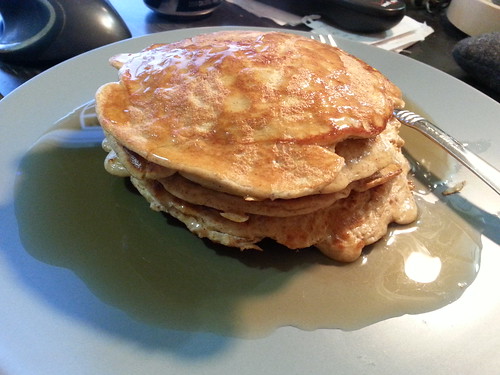 They even smelled all cinna-money! Cha ching!

So in short you could eat this every day and become super peaked and freaked and lose all kinds of weight. In fact Scott Herman himself eats this as a very typical breakfast meal to make sure he hits his macros marks, and you can see that guy is very lean. I’m very excited for this.

Next up I’ll be doing some super healthy protein cookies, or protein bars one of the two… Get my snackin’ on!