Trying out mass cooking bodybuilder-style for the first time!

Okay, for something a bit different now. Since starting my personal fitness program I’ve had a dodgy system for eating. As time passes it becomes obvious that diet can be the difference between big gains in the weight room, no gains or just getting fat again. A top recommendation by body builders is to cook in bulk, and I’ve started experimenting with that so I thought I’d log my thoughts on this process as I’ve just started to get a little more serious about it.

I tend to plan new projects slowly, simply because I pay attention to detail. Just as it took me 31 years to get involved with fitness, I planned that progression and have been keeping everything on track so far to excellent routine gains. Well the diet changes were also planned, but when it comes to preparing foodstuffs I know it takes a level of creative energy to get the ball rolling. I’m no chef, but money and other factors encourage me to plan better in this department so I’ve started the fine art of dabbling.

So first let me talk about where I’m at nutritionally right now. Prior to a couple years ago, I ate whatever and exercised none and obviously was fat. When I went through my thinning down phase, my only goal was to diminish the overall calories and revise my acceptable food items to those not lopsidedly full of carbs and fats. I was very happy with a series of low (under 500) calorie lunches, an under 400 calorie breakfast (or skipping it) and a 1000 calorie dinner. It averaged out to a total of 1750 or so calories daily which when combined with modest physical activity helped me drop from 220 to 150 in about a year. Then I started learning weight training, transfering my fitness program over to build muscle rather than burn fat.

Due to having a different goal, I had to change my diet. In an effort to pay more attention to macro (and micro) nutrients, I’ve been favoring a high protein diet of about 2400 calories a day. This is low for bulking, but my goal is to do a clean bulk (to continue to trim fat while still supplying the body enough protein and other materials to grow muscle)… I don’t want to ever have to have a “cutting” phase ever again. Since starting that I’ve had little to no real fluctuation in weight but have seen steady improvements in physical build and overall strength (strength is the real barometer I test gains at now… I figure if I’m getting stronger month to month, I’ll eventually have the body I want in all those superficial ways too).

My first step, which I’ve blogged about, was creating a real tight breakfast – my “Breakfast of Champions”, love it. One challenge I came up to right away was in the horrible winter we’ve had I’ve found it impractical to get up and cook at home before work, preferring instead to eat out. While I’ve found good breakfasts “on the go” from this it sucks to lose my extremely tight and cheap breakfast to the convenience factor. So step #1 in bulk food prep was figuring out how to mass cook and freeze breakfast. Thankfully this worked well and was a huge success for me, encouraging me to try mass preparing my lunch.

I was encouraged by friends (a couple gave me some practical demonstrations) to pre-prepare my food, and by this video online I felt was helpful showing how to mass bake chicken. I mean it’s simple to mass bake chicken, but sometimes you just needed to see someone else do it to get the motivational energy to try.

Watch his other video on food prep for more mass preparation ideas.

So with all this in mind, I decided my next step is to revise my lunch plans and start learning to cook in bulk. It took a bit but I’m putting that plan into action.

Step #2 being put into action

It’s popular in bodybuilding to mass cook food and have a tupperware party every week, so that’s what I decided to try and I’m having good success. Today I took 2 hours on my day off to prepare meals for the rest of the week. Pictured: 6 lunches for tupperware and 4 more chicken fillets to make into 4 more lunches. Let me talk a bit about the prep.

Got some chicken, trimmed the fat and cut the breasts into 1/2lb halves the long way (so long and thin cut). My favorite seasoning is a cajun powder blend, so slapped that on there…

You can tell I buy it by the big f’n tub.

Then took a zesty herb marinade and slapped the chicken in the fridge overnight. Today dragged it out, pan seared it then baked it. Thanks to the miracle of non-stick aluminum foil, cleanup of the baking pan was a snap, and there was only the searing pan to clean up after that. Next was distribution of foodstuffs. Boil-in-a-bag rice was the carb source, some white some brown, and that microwaved then strained during the other food prep (12 minutes per two bags in a big bowl in the microwave while I seared and baked the chicken, drained them in a strainer in the sink while I did the other prep) and it was the only extra item requiring actual preparation and dirtying any other dishes.

So let me show real quick what I prepared, lunch option #1…

Option 3, some sammiches and a snack for those days I get tired of the chicken… 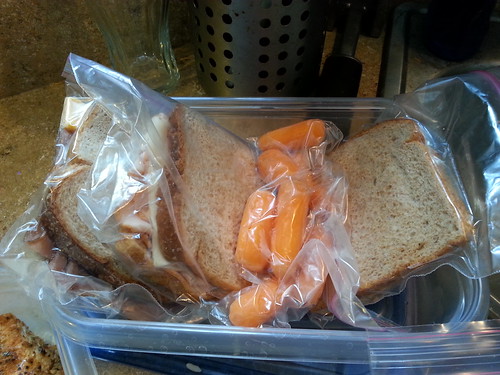 I’m aware this isn’t as financially feasible as the other options, I buy expensive deli meats and higher value low calorie bread. I could probably do a financial reassessment on this meal and knock $2 off somewhere I’m sure. Also had some leftover chicken for packing future lunches… 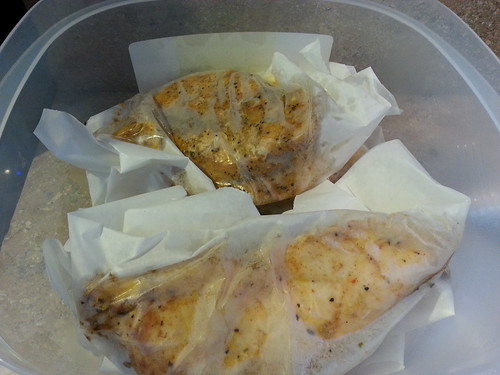 At least 4 extra servings of chicken were wrapped up and stashed for future use.

I like to spread the rice out on the top of my packed lunch and pack it with a lightly moistened paper towel, so reheating the rice is nice and moist instead of dry. Here the final foods all packed and ready to go in the fridge. 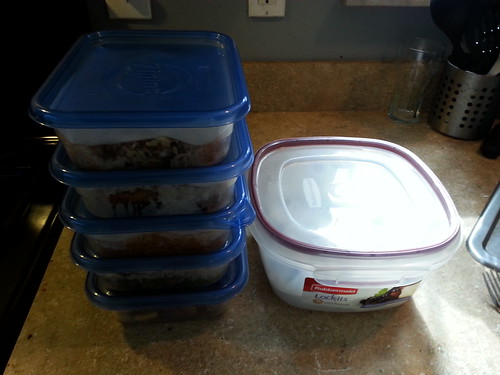 This hopefully will be a hallmark of my new dietary routine.

Well that’s my first foray into body building diet planning, and I feel like I’m off to a good start. I do need to experiment with other protein sources though, but I need to keep it simple so I actually can build a routine around doing it, so that will be taken one step at a time. So that puts lunch at sub 900 calories, with my 400 calorie breakfast…

Which, BTW, are still tucked away nice and frosty in the fridge, need to cook some more soon seems I’m down to my last two.

… and my 1000 calorie dinner all keep me within my 2400 calorie diet and give me all my basic nutrients so snacks here and there are fine. My next logical step, after playing with this a little more and seeing if I can’t make a fish or beef based lunch to mass cook with ease in the current system I’m using, is to start getting more variety for dinner. I love my routine dinner though (a half box of Cheesy Chicken Enchilada Chicken Helper) so not eager to mess with what isn’t broken.

Also on my diet-revising agenda, trying out some new high protein recipes for cookies and pancakes that I found online. Planning your diet is an important step to any fitness development, so I consider this blog as important as any of my exercise logs. I know those of you who cook for yourselves for years and years probably aren’t impressed, but hey the point here is proof of concept that plans can be put into action especially after friends nag you for months about how you suck at not cooking enough food for yourself.